Oracle just came with an update on its “Statement of Direction” for APEX. Once again Oracle confirms that APEX will continue its efforts to enhance this development platform, which should not be a surprise, but there were often doubts (especially from IT management) whether APEX will be a platform to base long term planning on, preferring ADF as the framework primarily promoted as the-way-to-go. Apex is mature, and will become more mature with the announced enhancements in this SOD.

So, version 4.1 should not be too far away from being released, as 4.0 is almost half a year “old” now (not taking into account the time the EA release was available).

Oracle lists some features planed for the upcoming version, and I just would like to comment on some of them:

Creating an APEX GUI for mobile devices using themes and templates is already possible with the current release, in fact, was possible with earlier releases as well. So I’m very curious what the Apex team comes up with, as I’m currently migrating a web application to Oracle/Apex which must be accessible from both: mobile and PC-based browsers.

iWhatever users will be very thankful ;-).

Great! Finally a pivot feature in Apex. I believe, this is the number 1 missing feature in Interactive reports, which keeps business users from using Apex as “Excel-replacement” analysis tool. Hopefully the user will be able to customize the pivot report just like in Excel.

Not being able to have multiple tabular forms on one page (out-of-the-box) is one of those annoying things almost every developer has experienced when starting to develop with Apex. Developers and customers/users will appreciate this enhancement.

So a developer will be able to choose between ROWID and (manually identifying) PK columns? That would definitely be nice.

This is possible now too, but only by using some JS library or writing your own DIV based layout. A build-in functionality would be of great help, as this often is a wanted functionality.

I bet there are numerous Apex applications which have just this functionality. So, no need to come up with custom solutions anymore? Wizard based? How customizable will this feature be? I’m very curious.

Popular posts from this blog

The build in jQuery UI Datepicker of Application Express is a very versatile component and it is very easy to configure the basic settings with the Page Item properties. One of the properties you can set, is the range of selectable dates by entering a Minimum and Maximum Date value. The “syntax” of these values is based on the jQuery UI Datepicker components date format capabilities, so this might be looking a bit awkward to us Oracle folks at first sight. Next to giving a static value or one of these Datepicker calculations you can reference an APEX Page Item to set the range values, which is a nice thing as we are able to calculate a range dynamically, based on some database value/calculations. The bummer is: the calculation only gets executed during the rendering phase of the page and changing the referencing Page Item’s value won’t change the Datepicker range. What you really want (yes, you do), is to be able to reference Page Items to control the Minimum and Maximum Date dynamical…
Read more

I promised to publish about this subject to one of the attendees during my presentation at KScope 12 in San Antonio. I used this functionality in my demo application (FifApex) and it seems there is interest in how to do this.
Most of the public websites like Facebook, LinkedIn, Twitter, Amazon or OTN do have it: an option to stay logged in, even if you closed the browser, so you do not have to authenticate each time you visit the site again. I’m pretty used to it and would be surprised if a website didn’t offer this convenient feature. OK, it’s not entirely secure, but, as I said, very convenient. I’m working on a “consumer” site/application, I’m building it with APEX and I want to offer this “remember me” option too. I knew an APEX based website that does offer this feature (www.plsqlchallenge.com) and I had a chat with the developer that implemented it’s login mechanism, Paul Broughton from Apex Evangelists. So, here my thanks to him for the original inspiration. Oracle Application Exp…
Read more 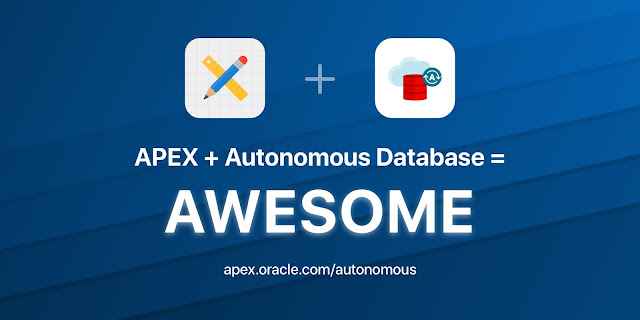 Yesterday at the KScope19 conference, Oracle announced the immediate availability of APEX, ORDS, and SQL Dev Web on Autonomous Database Cloud!
Chaitanya Koratamaddi dedicated an entire session on presenting the possibilities of APEX on the Autonomous Transaction Processing (ATP) and Autonomous Data Warehouse (ADW) Cloud Service Oracle offers.
APEX on Autonomous: What is it?You get a dedicated Application Express 19.1 instance managed by Oracle. Installation, Upgrade and Instance Configuration tasks of APEX on ATP/ADW are completely managed by Oracle, including ORDS.
Why choose for APEX on Autonomous?The provisioning of new environments is instantly and effortless within minutes. You will get a pre-configured, fully managed and secured environment to both build and deploy APEX applications. You can start developing immediately as soon as your DB service is provisioned. Provisioning is done in three simple steps: Sign in to Oracle Cloud Infrastructure ConsoleCreate a CompartmentCreate  an A…
Read more

The storm had now definitely abated, and what thunder there was now grumbled over more distant hills, like a man saying "And another thing…" twenty minutes after admitting he's lost the argument.

Our Book: by Roel Hartman, Christian Rokitta and David Peake
Books I did read
(or should have read):